Still thinking about Chadwick, so I wanted to reblog this! 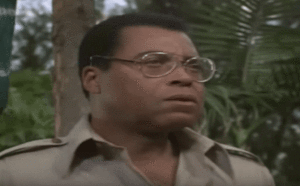 This month not only marks the first anniversary of the release of “Black Panther,” a.k.a. The Film That Won’t Go Away. What will be little noted is that this February is also the 40th anniversary of another well-remembered African/African-American moment.

On the small screen in February 1979, James Earl Jones, fresh from his then-uncredited voice-over role as Darth Vader in the first “Star Wars,” was seen in a safari shirt and glasses on every ABC-tuned television in America, stabbing his pen into a pad, shouting the following into the then five-channel television universe: “You old African! I found you! I found you! Kunta Kinte, I found you!”

“Roots: The Next Generations,” the mammoth 1979 sequel to the groundbreaking 1977 original, ends with Haley’s (Jones’s) journey to the Gambia to search for the young ancestor who was captured when, as the Haley family legend goes, he went into the…

From 2015. Now REAL relevant that Booker is running for POTUS.

The word “conspiracy” gets thrown around a lot in African communities, ever since the middle of the last century. And it’s understandable: the assassinations of King and X, the discovery of the Federal Bureau of Investigation’s COINTEL-PRO files, and the disposal in one way or another of any leader of African descent who doesn’t toe the blood-dotted line of the West. But how much of a conspiracy is it when the victim doesn’t have the required amount of power for self-determination in the first place? This book, released today, is about how relatively powerless people fought back against their status when, insult to injury added, even their relatively little power was taken from them.

It starts with Cory Booker, the neo-liberal mayor of Newark, New Jersey, and Chris Christie, the conservative…

So now you’ve been told.

Here’s what I wrote two years ago about the film, the man and his murder seven years ago this month.

Radio Journalist’s Ear To, And Voice Of, A People

Radio, when used correctly, can get you killed.

It’s the most powerful, most personal medium. Nothing else on planet Earth can reach more oppressed people—the poorest, the illiterate and semi-illiterate—with the same information at one time. It explains and reflects issues, events, and people. It provides company as well as context. At its best, its mixture and manipulation of supplied sound nourishes the spirit and offers hope for a better tomorrow and, perhaps, even eventual liberation.

So Jean Leopold Dominique, a member of Haiti’s light-skinned mulatto elite, was tuned in…

Welcome to WordPress.com! This is your very first post. Click the Edit link to modify or delete it, or start a new post. If you like, use this post to tell readers why you started this blog and what you plan to do with it.